The James Webb Space Telescope is the Start of an Exciting New Era! 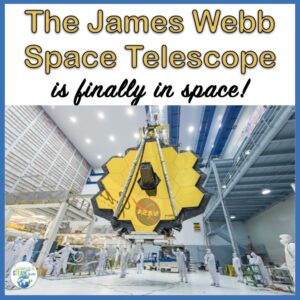 A New Time in Space Exploration!

With the launch of the James Webb Space Telescope on December 25th, 2021, an exciting new era of astronomy began.  The ‘Webb’ as it is known, is a collaborative effort of NASA (USA’s National Aeronautics and Space Administration), the European Space Agency, and the Canadian Space Agency.  It was named after James Webb, who led NASA from 1961-1968 during the Apollo mission that put people on the moon.

The Webb Telescope will take the place of the Hubble Telescope which has been exploring space since NASA launched it in 1990.  The Hubble has helped scientists learn a great deal during its three decades in use.  You may have seen some of the fantastic pictures taken by Hubble.  New information gathered by the Hubble even helped to pinpoint the universe’s age at 13.8 billion years old.  The Webb is about 100 times more powerful than the Hubble and will gather information that will significantly expand what we know about the universe.

Where Will The  Webb Telescope Be in Space?

From the time it launched, the Webb will take twenty-nine days to reach a point in space called L2.  L2 is 930,000 miles (1.5 million km) from Earth.  The Webb Telescope will stay in this location and stay even with planet Earth as they orbit the sun together.

Space telescopes use a mirror to collect the light coming from distant objects.  Since Webb’s mirror is too large to fit into the rocket taking it to space, it was designed to fold until it was small enough to fit.  When Webb reaches L2, the mirror will deploy and unfold like paper origami!  A sun shield the size of a tennis court will unfold in the same way.

Why Did Scientists Choose the L2 Location in Space?

How is the James Webb Space Telescope Better than the Hubble?

Some stars and planets are so incredibly far away that only a tiny amount of their light reaches us.  The larger the mirror is, the more likely it is to capture that speck of light.  So, larger mirrors help to create a more powerful telescope.

How Does the James Webb Space Telescope Work?

The Hubble sees things in space as we do.  It sees the light emitted from stars or reflected by planets, moons, or asteroids.  That works well for objects which are relatively close by.  However, the Webb is different.  It does not see visible light as we do.  Instead, it sees infrared light.

How Is Infrared Light Different From Light We See?

Light travels in waves.  Each of the colors of light we see, red, orange, yellow, green, blue, indigo, and violet, are made of waves.  Each color has its own wavelength.  These are called visible wavelengths.  Red has the longest wavelength, and violet (purple) has the shortest.  Infrared light is made of waves that are even longer than red light.  Infrared light is there, but we can’t see it!  Anything containing heat gives off infrared light waves.  The hotter an object is, the more infrared light it gives off.  The Webb telescope will be able to see the infrared light given off by a bumblebee 250,000 miles (400,000 km) away.  That’s like you standing on Earth and seeing a bumblebee that is on the moon!

Why Has The Webb Telescope Been Designed To See Infrared light?

Since the universe began with the Big Bang 13.8 billion years ago, everything has been flying outward, and the universe is getting bigger and bigger.  The stars on the outer edge of the universe have been traveling so fast, for so long, that by the time their light reaches Earth, it is stretched out.  Red, orange, yellow, green, blue, indigo, and violet light waves come from those stars, and by the time the waves reach Earth, they are stretched to infrared length waves.  Since people cannot see infrared light, those stars are invisible to us.  Since the Hubble was designed to see visible light, it cannot see the infrared light from the very distant stars.  The Webb telescope was created to gather infrared light to see the most distant stars.  The fact that Webb can see infrared light is another reason it is a better telescope than the Hubble.

Why does the James Webb Space Telescope Have Such a Large Sun Shield?

The sun gives off the visible light we see and infrared light we cannot see (but we feel as heat!).  Since the Webb Telescope searches for tiny amounts of infrared light given off by faraway stars and planets, the intense light from the sun would overwhelm it and blind it.  The sun shield is always positioned to block the sun’s light.  On the dark side of the sun shield, the Webb spacecraft will be kept at temperatures below -370 degrees Fahrenheit (-220 Celsius).  The sunny side of the shield will be 570 degrees Fahrenheit (300 Celsius) hotter than the dark side.

How Long Will The James Webb Space Telescope Last?

The Webb uses fuel to keep itself in the proper orbit.  It also burns fuel to keep its heat shield facing the sun.  That fuel is expected to last ten years.  Webb is designed with a refillable fuel tank even though at this time we have no way to bring fuel there to fill it up.  Scientists may develop a way to do that between now and the time it runs out of power and extend the telescope’s life.

So Much to Learn!

The James Webb Space Telescope deployment is an exciting event for anyone interested in space exploration!  In the next few years, we will learn much more about planets, stars, galaxies, how the universe formed, and what else is out there!  There is still so much to learn about space.

Below is a video of how the scientists want to see things unfold if all goes according to plan!

Here is a resource for those of you that are teaching.  It is full of challenging concepts (just like the above post), it is recommended for middle school and up. 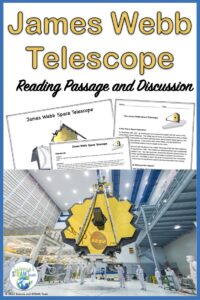