Seven Different Types of Bridges and Why We Build Them 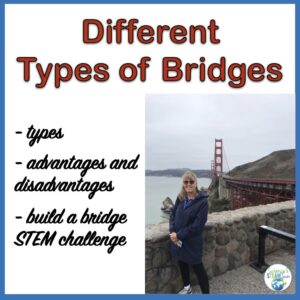 Inspired By the Bridges in San Francisco

Seeing these magnificent bridges inspired me to learn more about these landmarks.  Of course, this led me to learn about all different types of bridges. 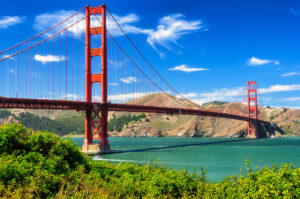 The Golden Gate Bridge is the symbol of California.  This suspension bridge was designed by Joesph Strauss in 1917.  Construction of the bridge began in January of 1933, and it opened in May of 1937.  The Golden Gate Bridge helped people to get from mainland California across the strait to San Francisco.  This bridge is one of the most photographed bridges globally and was voted one of the “Seven Wonders of the Modern World” by the American Society of Civil Engineers. 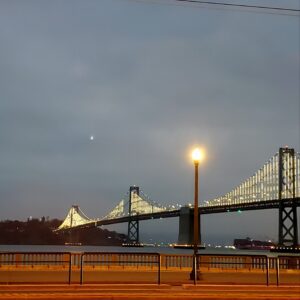 We saw the San Francisco-Oakland Bay Bridge from a distance numerous times during our stay.  However, it looked the most spectacular in the wee hours of the morning, all lit up as we made out way to the airport.

The Bay Bridge opened just before the Golden Gate Bridge in 1936.  This bridge connects the cities of San Francisco and Oakland.  This bridge consists of two suspension bridges built back to back, and the two sections are connected by the Yerba Buena Island Tunnel.  The San Francisco-Oakland Bay Bridge is a double-decker bridge.  Trains ran on the bottom deck when it was first built, but now cars travel on both decks.

Why are Bridges Important?

Bridges connect communities together in a way that is more convenient than if we didn’t have them.  Like the bridges above, they can help people cross over water, and these structures can also span across valleys, railroad tracks, and roads.  Bridges make it possible to ship things from place to place faster.

Bridges are built to carry the weight, or load, of whatever is going across them.  They are also constructed to stand up to the environment, including the weather. 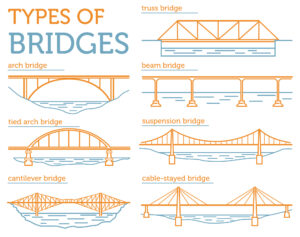 What are the Most Common Types of Bridges?

The four most common bridges are beam, arch, suspension, and truss bridges.

Truss bridges are the strongest type of bridge.  A truss is a structure whose parts are put together to form triangles.  Straight steel bars are used to build truss bridges.

There are Several Other Different Types of Bridges

Cable-stayed bridges have one or more towers.  The towers have cables, also known as stays, that connect directly to the bridge’s deck to support it.  There are two basic designs.  One design is the fan design.  Cables are suspended from one spot at the top of the tower and fan out.  The other design is called the harp.  The wires are suspended at different locations along the tower.  Cable-stayed bridges are economical to construct.  They are stiff, but they can still sway in the wind.  Many people like the modern design of this type of bridge.

Tied-arch bridges combine features from beam bridges and suspension bridges.  They are used for crossing over smaller spans such as rivers.

This video of the collapse of the Tacoma Narrows Bridge really grabs students’ attention and is a great introduction to bridge engineering.  Prolonged high winds caused the bridge to resonate or ‘flutter’ higher and higher.  Engineers learn from failures like this so they can be avoided in the future.  It’s incredible to see how flexible the concrete and steel deck of this bridge was!

Here are some videos to show your students to get them thinking about different types of bridge designs.  This video is suitable for elementary grades, and it gives basic examples of the beam, truss, and suspension bridges.

If you are working with older students, show your students the video STEM Challenge: What Makes a Bridge Strong? by science teacher Michelle Gay.  Michelle discusses the forces (compression and tension) that a bridge must have.  Furthermore, she gives hands-on demonstrations of three types of bridges (beam, truss, and arch).  You can model the bridge types using the same demonstrations Michelle did.

This PBS website has some great ideas for teachers that want some hands-on activities for students.  Simply click on the different types of bridges (arch, beam, suspension, and cable-stayed) to see them.

There are many bridge-building challenges that you can do with your students, depending on their age.

Reading the story The Three Billy Goats Gruff is a good starting point for young children.  After reading the story, students can use blocks and or sticks to create bridges for “goats” to go across.

With primary grades, use one or two materials and some tape.  Craft sticks and tape are a simple way to start.  Separate two desks by four to ten inches and let them get started.  Give students a small car to drive across.

As students get older, more materials can be added.  They can also be asked to build a specific type of bridge.  Challenge students to build bridges that can hold the biggest load (weight).  Building the longest bridge to hold a given load is also fun!

Here is a set that was built with this blog in mind.  It includes posters about each type of bridge, as well as suggestions that were offered here; all in a printable format. 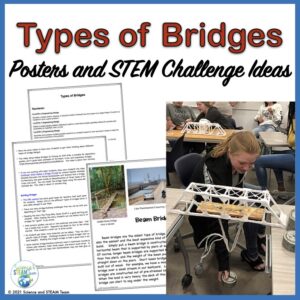 I use this build a bridge resource around the hundredth day of school, but it can be used any time. 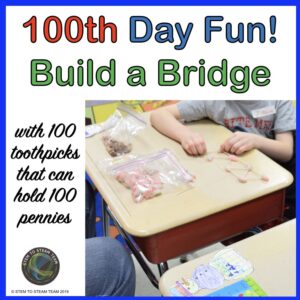