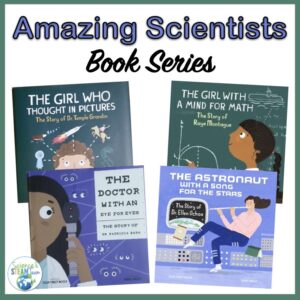 The Amazing Scientists book series, written by Julia Finley Mosca and illustrated by Daniel Rieley, features four famous women scientists.  I first became aware of these delightful picture books on one of the National Science Teachers Association’s lists of top STEM books of the year!  Bookseller, Kathleen Carey, sums up the series well: 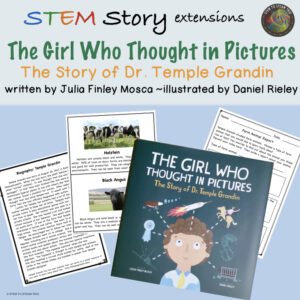 The Girl Who Thought in Pictures the Story of Dr. Temple Grandin is the first book I purchased.  To begin with, this was the first book in the series.  However, it also spoke to me because Temple was diagnosed with autism as a child.  I spent almost half of my career teaching children with special needs, including many students diagnosed with autism.

Who is Temple Grandin?

Temple Grandin didn’t behave like other children when she was born. Fortunately, her parents could afford to hire tutors for her when she was little. When she was older she went to private schools. She was teased a lot and got kicked out of school because of her behavior (she was later diagnosed as autistic). Temple when to live on her aunt’s farm. There, she became interested in horses and cattle. She eventually earned a degree in animal science. Temple invented the “squeeze machine” to calm people and animals. She also invented a cattle chute that is used in more than half of the farms in the United States.

Research different types of cattle, learn more about autism, or invent something to use with animals. 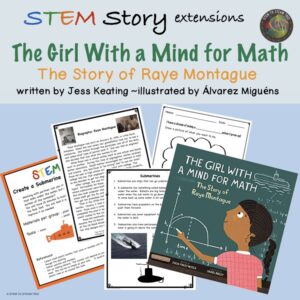 I enjoyed the first book so much that of course, I had to get the next one in the series: The Girl With a Mind for Math The Story of Raye Montague!

Who was Raye Montague?

Raye Montague toured a submarine with her grandfather when she was little. He told Raye that engineers built it. She decided right then that she wanted to be an engineer. When she was in college she was told that engineering wasn’t taught to black students, so she got her degree in business. She was hired by the Navy as a typist in the department where submarines were built. Raye watched and learned. Once, when everyone got the flu, she did all of their work by memory! She went on to get her degree in engineering and designed ships.

Study buoyancy and design a submarine that sinks under the water but doesn’t touch the bottom. 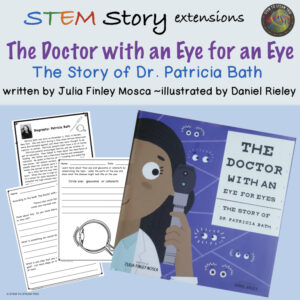 I really enjoyed learning about Patricia Bath when The Doctor with an Eye for an Eye came out!

Who is Patricia Bath?

Patricia Bath was an African-American who encountered a lot of discrimination.  Her parents encouraged her to get an education. Patricia always loved science and went on to earn her Ph.D.  She was the first African-American female to become an ophthalmologist. She was awarded a patent for a device that can restore eyesight by treating cataracts.

Learn more about the eye by studying glaucoma or cataracts. Make a model of the eye.  Study the eyes of different animals. 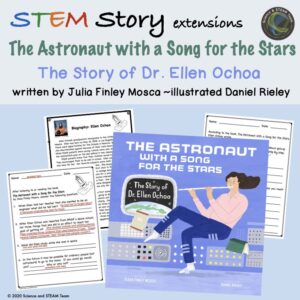 The last book in the series (so far), The Astronaut with a Song for the Stars the Story of Dr. Ellen Ochoa, was inspiring as well!

Who is Ellen Ochoa?

Ellen Ochoa’s family immigrated to the United States from Mexico. Ellen loved math and science, but people teased her because of this. She also loved to play the flute. She decided to go to college to study music. However, once she got there she decided to study engineering. She watched the first woman, Sally Ride, so up into space. Ellen was determined to do that. After much work, she became the first Hispanic woman astronaut. She also has several inventions.

Activities to do with this book:

Study forces and motion, make a hoop glider or a catapult!

If you want to read more about the importance of literacy and science check out one of these posts.

**This post contains affiliate links for Amazon. By purchasing an item on Amazon using one of these links, I will receive a small commission on your purchase.**