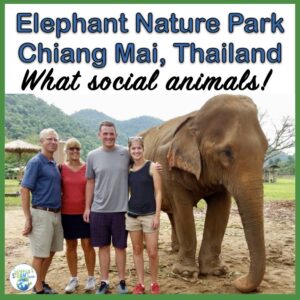 About This Ethical Elephant Sanctuary in Chiang Mai

Elephant Nature Park is one of the most ethical elephant sanctuaries in Chiang Mai, Thailand.  It was founded in 1995 by Lek Chailert.  During her childhood, Lek lived in a small village north of Chiang Mai.  She spent time with her grandfather, who took in sick animals.

Asian elephants are the national symbol of Thailand.  When Lek learned that they were becoming endangered and the reasons why she decided to promote elephant conservation.

Elephants at this center are allowed to roam freely, with the exception of two bull calves who have their own large enclosures.  You will see why when your read about the behavior they displayed!

Elephants aren’t ridden here,  nor can you swim with them anymore.  Several years ago people could but, the sanctuary is adapting their policies as they learn more.   You can feed the elephants and walk among them.

This nature preserve is home to about 75 elephants.  It also has many water buffalo, dogs, and cats.

In the wild, elephants live in groups of seven to one hundred elephants called herds.  Females take care of the babies and other elephants in the group.  Each herd has a matriarch.  This is usually the oldest and wisest female.  Other elephants follow her lead.  Mother elephants establish an “aunt” for their calf.  This aunt tends to the baby with the mother, and when the mother isn’t available.  This family structure was clearly seen at the elephant sanctuary in Chiang Mai.  Babies were always with others in the group.  Often between other elephants, like in these photos we took.

Adolescent male elephants, bulls, were another story!  In nature, males go off to live alone.  They only join the group during mating season.  At the sanctuary, there were two male “teenagers.”  They each had a large, separate enclosure.  Our tour guide told us that these were the “bad boys!”  They like to throw rocks with their trunks.  Sure enough, a few seconds later we heard a loud bang on a metal roof, as one of the boys hurled a rock towards us!  Fortunately, they had erected a second fence keeping guests a safer distance from their enclosure. 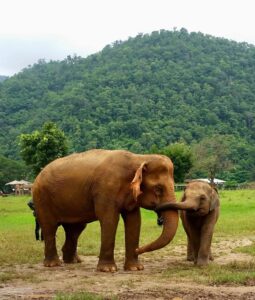 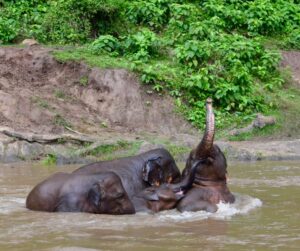 Just look at the photo of the female elephant and calf.  Elephants touch each other with their trunks as a form of communication. You know this mom and baby love each other!  Elephants trumpet when they are excited.  One of the elephants above was trumpeting, a sign that she was really enjoying her bath!  The baby in the middle looks happy too!

We’re not sure if the rock-throwing males were trying to communicate something to us or play with us (throwing rocks is something the males do to play). 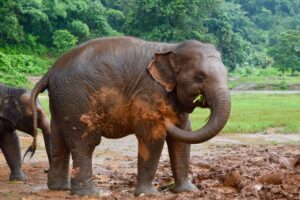 Living in groups provides opportunities for the young to learn from the more mature elephants.  The young follow their mothers and others in their herd.  This is how they learn to search for food and to use their trunks.  They also learn different vocalizations.  Juvenile females learn how to care for babies by watching older elephants take care of their young.

Another thing they learn is how to take a mud bath.  Mud baths are essential for keeping elephants cool and protecting their skin from the sun.  The mud also protects them from insect bites.  Mud bathing was so fun to witness.  They could really spray that stuff! 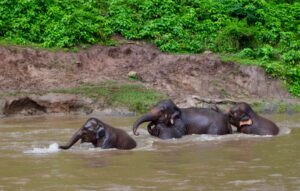 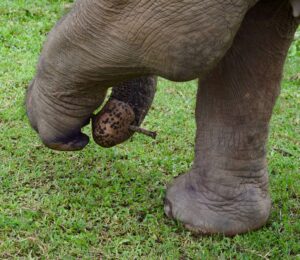 While we visited, a baby elephant broke away from the group and started being pulled downstream by the current.  One of the adults let out a loud trumpet sound.  All of the elephants roaming the park rushed towards the river.  They caught up to and prevented the calf from going further down the stream.  People that work there told us that this happens whenever a baby starts being pulled downstream.

We also saw an elephant pick up a stick and use it to scratch its leg.

Other Ways that Elephants Display Social Behaviors and Intelligence

Elephants have over 75 different sounds that they make, depending on what they are trying to communicate.  They can use their chest, forehead, mouth, and trunk to make these sounds.  Besides trumpeting, they make clicks, groans, and barks.  Elephants also produce a rumble that travels through their feet. The rumble is too low for people to hear but can be heard over long distances by other elephants.

Elephants won’t leave sick or injured animals behind.  They will bring the sick animal food and tend to it.  If an elephant dies, others mourn their friend.  The herd has a burial ceremony during which they make deep rumbling sounds and touch the dead.  Years later, elephants will stop and pay respect to the skeleton.

Learn More about this Ethical Elephant Sanctuary in Chiang Mai

Teach your students about animals that live in groups with this resource. 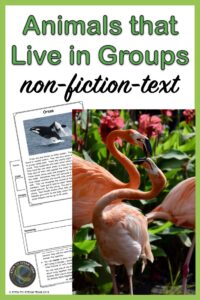 Read more about our travels and the science behind them!