4 New Sports at the Summer Olympics and the Science Behind Them! 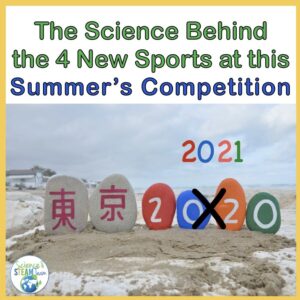 Why are There New Sports at the Summer Olympics?

Two of the new sports at the Summer Olympics have a close connection to the host nation.  The Olympics are scheduled to be in Tokyo, Japan.  One new sport, karate is a sport that started in Okinawa, Japan many years ago.  Karate is still one of that countries’ favorite martial arts.  Tokyo is near the ocean, so it is a logical place to introduce surfing as an Olympic sport.  In addition to surfing, two other sports were added in hopes of promoting interest among a younger crowd.  These sports are skateboarding and sports climbing.

The Science Behind the New Sports at the Summer Olympics 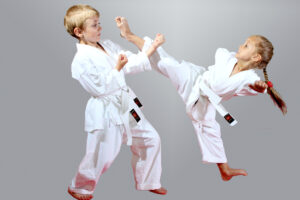 While karate includes the biology of the body and psychology of the mind, all of the movements revolve around the physics of forces.  Karatekas stand in positions that keep their center of balance, or center of mass, low to the ground.  This makes it harder for an opponent to knock them down.

When kicking or punching, they often pivot their body forward to increase the size of the force moving into their opponent. When doing this, the entire weight of their body goes into the impact.  They follow through with their motions to take advantage of the momentum.  Another technique that makes karatekas effective is focusing their kicks and punches into a small area.  If you were doing karate and hit someone with your entire open hand, the force you apply would be spread over a large area.  Consequently, using the same force to hit someone with just the base of your palm would impact them on a smaller area, creating much greater pressure. Ouch!

The Science Behind Surfboarding 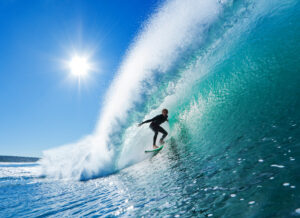 Surfers will be looking for big waves at Shidashita Beach.  Ideal waves at Shidashita will be 1 to 2 meters (3 to 6 1/2 feet) in height.  These waves which surfers ride are considered surface waves.  They are created when strong, consistent winds blow across the top of the water toward the shore.

When looking at surface waves, it appears that they are a rush of water racing toward the shore.  In reality, waves are an upward and downward movement of the water.  One way to picture this is to lay out a long rope and snap it up and down.  The rope itself does not move forward, rather it becomes an up and down wave.

The height of a wave is measured from the still water line to the top point called the crest.  In front of the crest of a wave is a low point in the water called a trough.  The trough is measured from this low point in the water upward to the level of the still water line.  A surfer positions his or her board on the crest of the wave and ‘falls’ downward toward the trough.  As gravity pulls the surfer down, the forward energy of the wave propels them toward shore.

Buoyancy is another scientific principle needed to surf.  Buoyancy is the upward force exerted by the water, which allows the surfer to stand on top of the water.  A 60 kilogram (132 pounds) surfer simply needs to push out of the way, or displace, 60 kilograms of water.  This is easily accomplished by their lightweight, or low density, surfboard.  These boards are made from plastic foam which is covered with fiberglass. Gravity pulls the surfer down, while buoyancy pushes them back up with an equal and opposite force.

The Science of Skateboarding 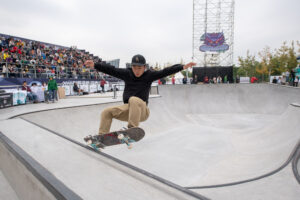 Skateboarders must have a love-hate relationship with friction!  They rely upon the coarse sandpaper on their boards to stay standing on them.  That’s a lot of friction.  As they push off the ground to accelerate forward, large amounts of friction are needed to prevent slipping.  Rubber-soled shoes help supply that friction with the track.  The faster a skateboarder moves, the more they have to battle friction with the air.

Sometimes, it is better to have less friction. There are ball bearings in the skateboard wheels that reduce friction, allowing the rider to accelerate to high speeds.  Oil or graphite powder is added to the ball bearings to make them even more slippery.  The silicone wheels supply just enough friction to grip the track for control, but not so much friction that they rob the skater of speed.  You can bet that all skaters at the Olympic level have some permanent reminders of friction on their knees, elbows, hips, or shoulders!

Inertia is the tendency of an object in motion to remain in motion or an object at rest to remain at rest unless the object is acted upon by an outside force.  In skateboarding, there are a lot of outside forces!  From a stopped position, a skateboarder must overcome inertia by supplying a force.  They do this by pushing off with their feet.  Turning, grinding, and going up ramps, are all outside forces that steal energy and slow down the rider.  This is why they constantly need to add more energy by pushing off with their feet.  Riding down tall ramps is another good way for a skater to overcome inertia.  The energy gained by going downhill is supplied by gravity.

The Science of Sports Climbing 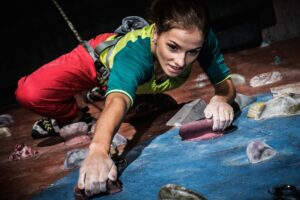 Climbers develop a keen sense of the science they depend on.  The forces used to climb, the equipment used, as well as the physical and mental conditioning involved require a wide range of scientific principles.

One of the most obvious is the friction that keeps them on the wall.  Holds are plastic grips that are attached to a climbing wall.  Friction between a climber’s hands and the holds depends on several factors.  Hand position on the hold is one.  The more that the palm of the hand and fingers make contact, the more friction.  Friction increases as the climber squeezes harder on the hold.  Sweat on climbers’ hands decreases friction, making the hold slippery.  To overcome this problem, climbers wear chalk bags.  They dip their fingers into the powdered chalk, which absorbs the moisture on their hands.  Gymnasts and weightlifters use chalk for the same reason.  Climbers also depend on friction between their feet and the holds.  To get this, they wear special shoes made of soft rubber, which spreads out and increases friction.

Another example of science used in climbing is the special rope used to stop a climber from falling if they lose their grip.  The ‘dynamic’ rope used stretches under the weight of a falling climber.  This spreads out the force, so there is less of a jarring impact than would happen if the rope had no stretch to it.  Dynamic rope is designed to prevent injuries.

All of the best athletes take a scientific approach to training.  They must be very knowledgeable about their diet since excellent nutrition is required to perform their best.  Many top athletes consider diet the most important part of their training.  All athletes need to know the types and amount of exercise to do.  They understand how rest and recovery after exercise are essential to becoming stronger, and so they are ready to train again the next day.  Even the mental side of their performance depends on the science of psychology.  Understanding how the mind works helps to develop the focus and confidence athletes need.

If you would like to teach your students about the upcoming Olympics, some of our resources might be of interest to you.  We have resources for all grade levels! 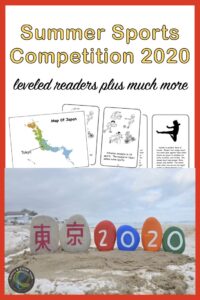 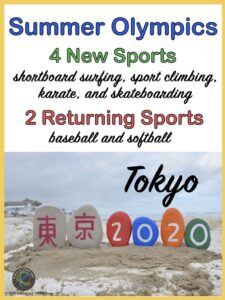 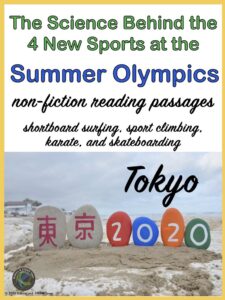 Enjoy the new sports at the Summer Olympics.  While you are watching, think of all the science behind the sports.  You may begin to see everyday things in a new light because it’s all science!

To learn about another event this summer, read Periodic Cicadas: What’s the Big Buzz About?